wordle word of the day

From a Mushroom or Mycology Perspective

side of the face below the eyes.
If we were to look back to the earlier Wordle word 'TROPE', cheek could make us think of a 'cheeky' mushroom hopping around the forest with a bit of a mischievous grin. Picture the way Bruno walks up to his sister on her wedding day. We may not talk about Bruno but we certainly talk about mushrooms.

From a very straight-forward perspective, cheek and mushroom dishes have always been quite popular. Yes, that is the meaty  cheek portion of an animal's face. 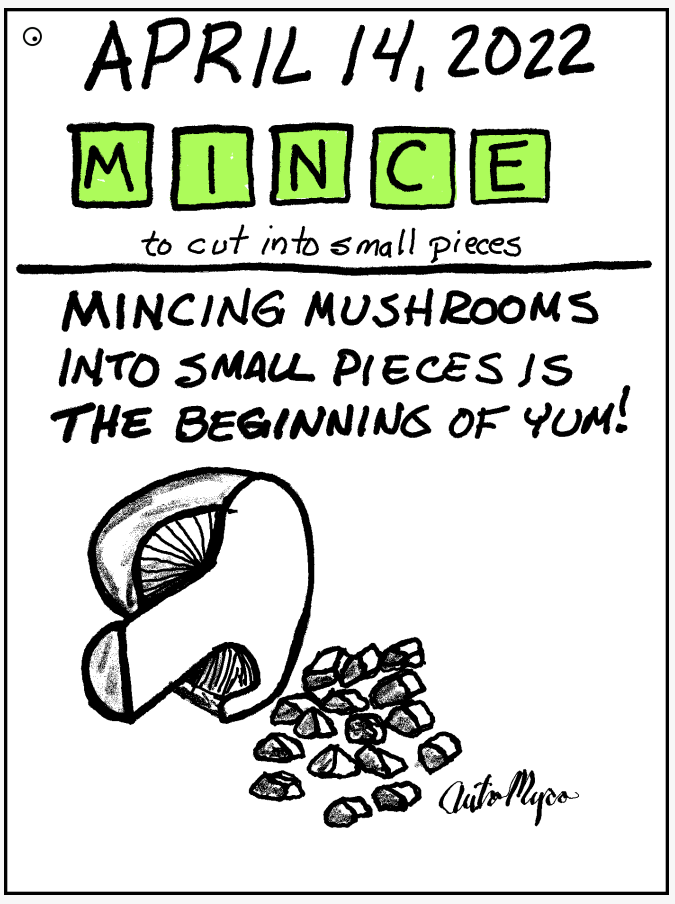 a thick solid piece of something.

There is a mushroom commonly known as Tree Ear or Cloud Ear or Black Fungus. These mushrooms are known for their jelly-like consistency and they are very much on the chewy side. These mushrooms are quite popular in Asian cuisine. The Tree Ear (black fungus) mushroom has been used in traditional Chinese medicine for hundreds of years. Black fungus is low in fat, high in fiber (fibre our April 6 Wordle word) and loaded with many essential vitamins.

There is also the Black Trumpet Mushroom found in the United Kingdom during late summer and fall. They are said to be one of most potent mushroom flavors available from wild mushrooms in the UK. They deliver intense earthy and woody flavors with a hint of sweet.

The Black Truffle is the fruiting body of the underground ascomycete fugus. The black truffle or black Perigord truffle is named after the Perigord region in France.

A set of steps leading from one floor to another.

cause great fear.
In the Myco-World, what is a Mushroom Scare? We could a couple of different directions with the word scare and mushrooms today. First of all, there are poisonous mushrooms and sometimes people eat these mushrooms and it can cause quite the medical scare.
There is also an irrational fear of mushrooms or fungi in general with some people. This varies from region to region around the world. In China, you find very little mushroom fear because fungi has been used in food and medicine in China thousands of years. In some western countries, there are some people who do have an irrational fear (phobia) when it comes to Mushrooms.

Foray is an uber-fungi Wordle Word of the Day!!!
A Fungi Foray is a myco-cool way to describe a group of people getting together to forage in the woods for mushrooms.

The Makings of a Successful Mushroom Foray from Fungi Perfecti.

Okay, I'm back (see what I did there?). Well, the NY Times skipped 'Fibre' as the Wordle today. I'm guessing that after irritating people with 'Natal' yesterday, (did it again) they opted to avoid the British spelling of 'Fibre' and went straight to 'COMMA.' There are a few directions to take the word Comma and mycology and they are both a bit of a stretch...
COMA - The Connecticut-Westchester Mycology Association

Told you it was a stretch because the COMA acronym isn't even five letters but it is pretty close. And, (did it again) they have a gorgeous logo with a spore print for the 'O' in COMA.

Oyster and shiitake mushrooms are up their in the "most fiber" category with about 2 grams of fibre per serving.

You can grow your own gourmet medicinal mushrooms at home
with the AutoMyco™ Automated Mushroom Growing Chamber.

​The AutoMyco takes the guesswork out of mushroom fruiting (growing) and lets you enjoy delicious uber-nutritious mushrooms at home.

Natal Mushroom is a slang term for the Psilocybe natalensis mushroom in the family Hymenogastraceae. The name identifies the mushroom as being found in the Natal region in South Africa.

SNOUT is used a few ways in mushroom world. There is the Black Bulgar (pig snout mushroom) and the mobile app from UC Berkley students called 'Snout'

While there isn't really a Rupee Mushroom, Googling "rupee mushroom" does yield to rather divergent (or maybe not) concepts. One of these concepts is the conversion rate between Rupees (the traditional currency) and MUSH the mushroom crypto currency. The other concept that Google returns is about "The World's Most Expensive Mushroom" which will set  you back 30,000 Rupees ($398 US Dollars) per Kilogram for the Gucchi mushroom. The Gucchi mushroom is wild foraged from the foothills of the Himalayas.

Grow Your Own Mushrooms AT HOME